How do I add features to the Annotate Image Dialog

LiveCode for FM comes with some build in custom components, but what if these provide almost what you want but not quite?

In this lesson we will extend the Annotate Image Dialog with the ability to add text labels to the image.

Make a copy of the Annotate Image Dialog

Each custom component is a LiveCode stack, that implements certain required features in order to run within FileMaker.

At the moment you can't clone built in custom components within the Workspace so start by downloading the attached stack.

Unzip the file and open 'stack.livecode' in the LiveCode IDE. 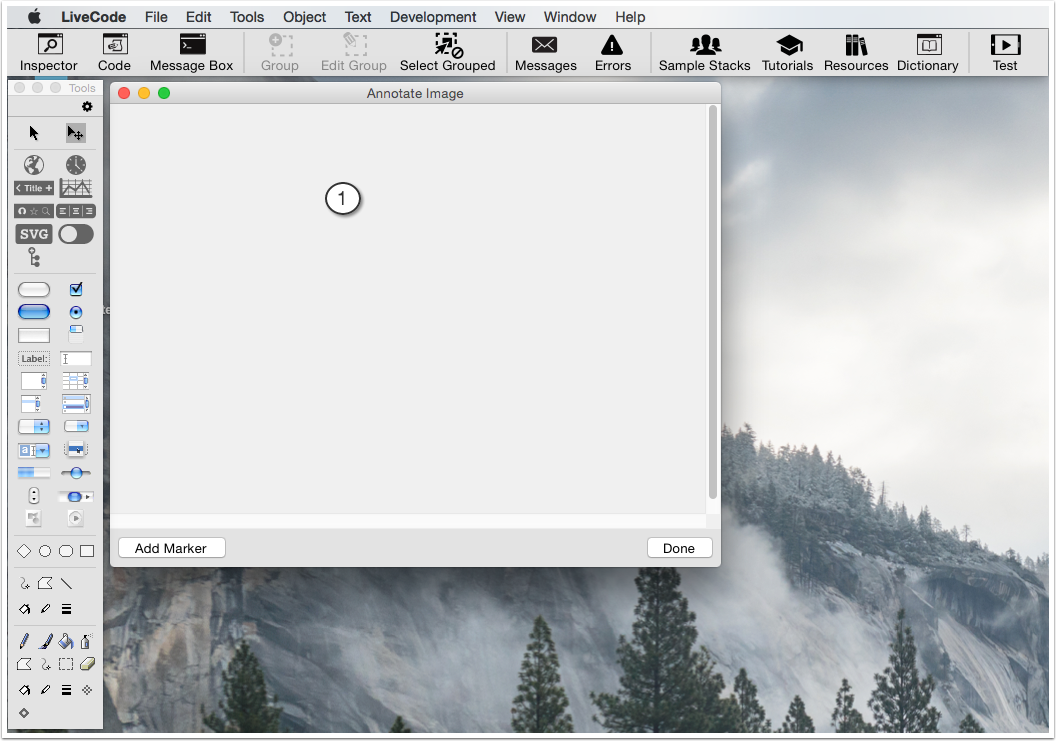 LiveCode requires stacks that are open at the same time to have unique names so the first step is to rename the stack. 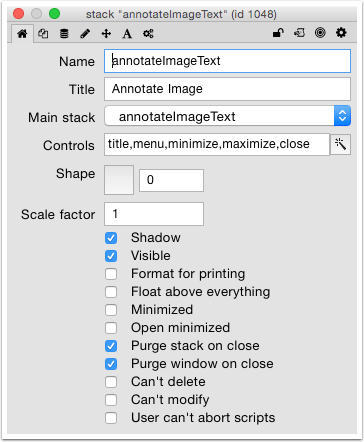 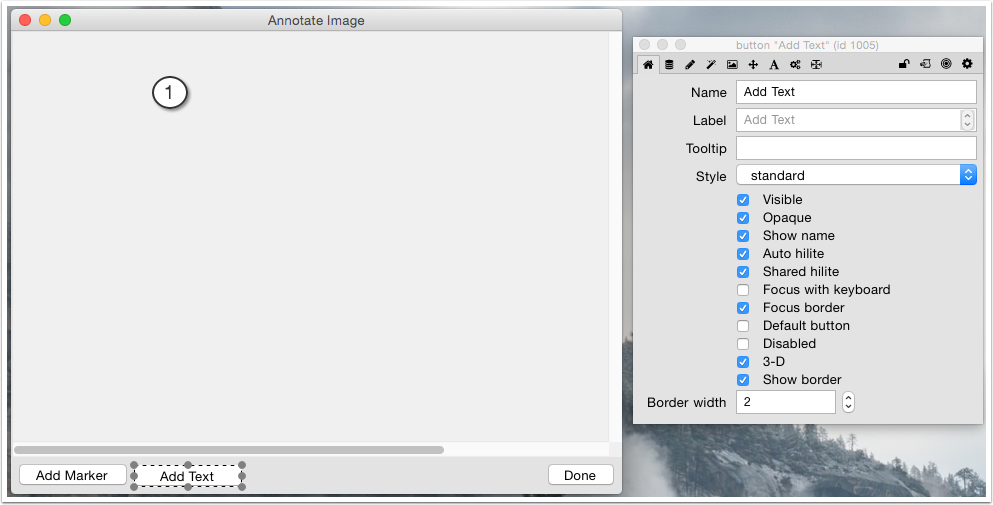 The button will call the AddText command, which will be implemented on the Card Script.

The AddText command will create a field that the user can add text to.

Create the behavior for text fields 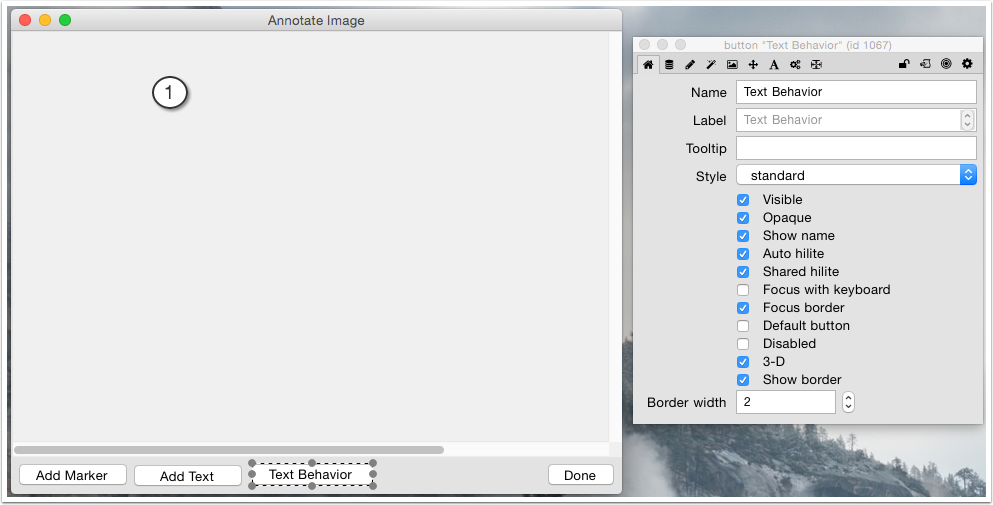 What is a behavior?

Behaviors are a method to create common functionality between objects without duplicating the scripts.

An object with a behavior set will act as though its script was set to the script of the behavior button or stack. If multiple objects share the same behavior, each will have its own set of script local variables. Any references to me, the owner of me, and so on, will resolve to the child object currently executing.

The fields/text areas have to behave differently in different states.

To allow fields to be moved around we will use the grab command. Locked (lockText property set to true) receive the mouseDown message so we can grab the field on mouseDown, the field will remain grabbed until the user releases the mouse button, at which point the control will receive a mouseUp message.

Open the script for the "Text Behavior" button and add the mouseDown handler.

When the field receives the mouseUp message we want to make it editable. Add the mouseUp handler.

When you are stop editing the field, by focusing away from the field, we want to make the field non-editable.

When a field loses focus is receives one of two messages

Add handler for these two messages.

The setEditable command changes the state of the field by setting properties. It takes one parameter, pEditable, which is either true or false.

In addition when a field is set to non-editable we make it tall enough to show all the text.

The "Text Behavior" button should not be visible to the user so set its Visible property to false.

Allow the user to select away from a text field

Next we need to ensure users can click away from a text field.

A card can receive mouseUp messages, just like the markers and text fields. If a user clicks somewhere that is not a marker or text field we want to unfocus all the objects.

Add a mouseUp handler to the Card Script, this will be triggered if the user clicks on the card itself and will unfocus all the controls.

Behaviors are referred to by long id, so if you change the name of a stack you need to ensure that any existing behaviors can still be resolved. Currently the behavior for marker is set on the template control, since we have changed the name of the stack this will need updated.

We will update the AddMarker command to set the behavior when we create new markers.

Open the Card Script from the Object menu and add a line of code that set the behavior of the new marker.

We also need to update the stack script to load this plugin and to store and load any text along with the image.

Open the Stack Script, we will be updating the FileMakerAction handler.

Note: The FileMakerAction handler is called whenever the component is called from FileMaker via LC.

Firstly we will update the code that makes the plugin visible. This is done using the modal command. We need to update that line to launch the "annotateImageText" stack.

Update the code to

Next we will store any text fields. Find the section of the stack script that stores the maker information, it should be lines 66 to 72

We need to do the same for text fields, add this code after the marker saving code.

For makers we only store the location, for text fields we also need to store the text.

Next we need to load the text field information that is stored along with the image.

Go to the section of the stack script that loads the marker information. It should end on line 55.

We need to do the same for text fields

Firstly we find out how many text fields there are. Add the variable declaration and code to the section that gets the number of markers.

Then add this code after the marker loading code.

Adding the stack to FileMaker as a Custom Component

Now we are finished updating the stack in LiveCode we want to add it to FileMaker as a custom component. 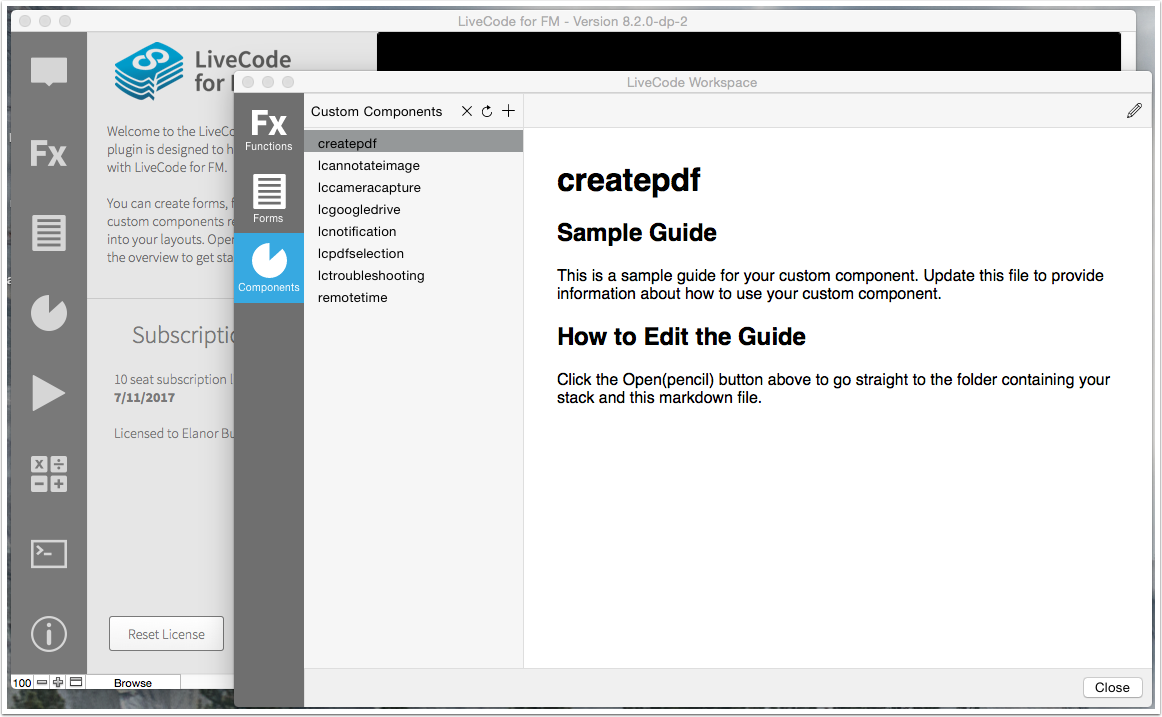 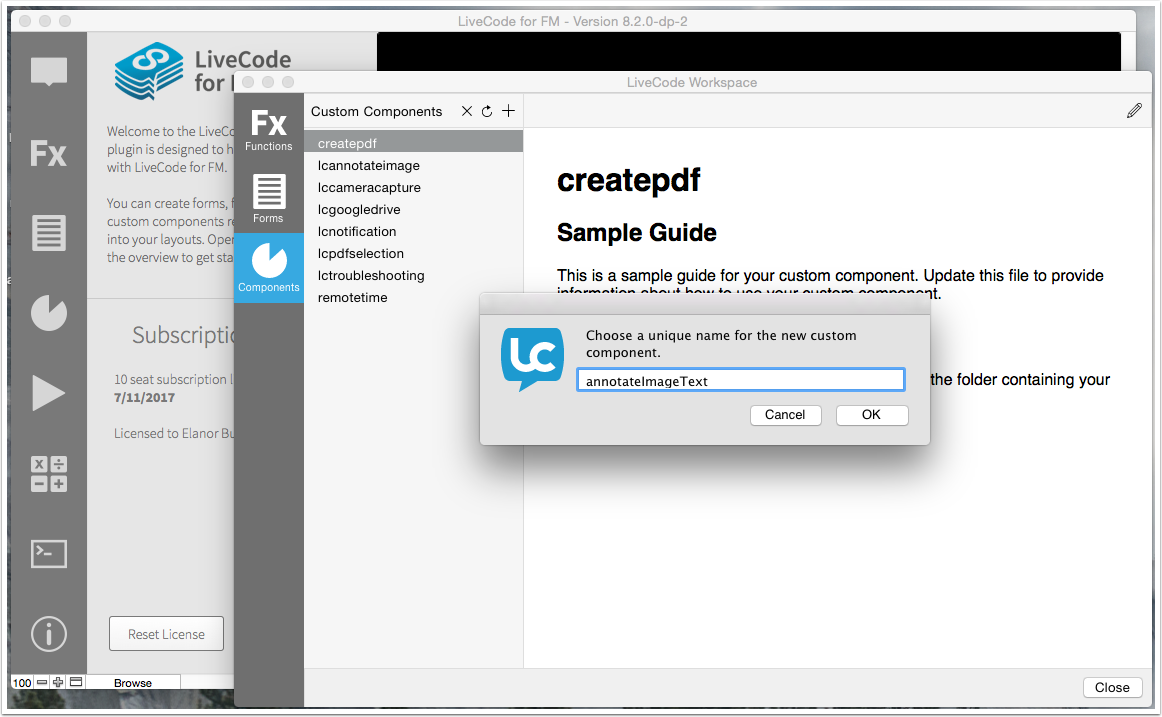 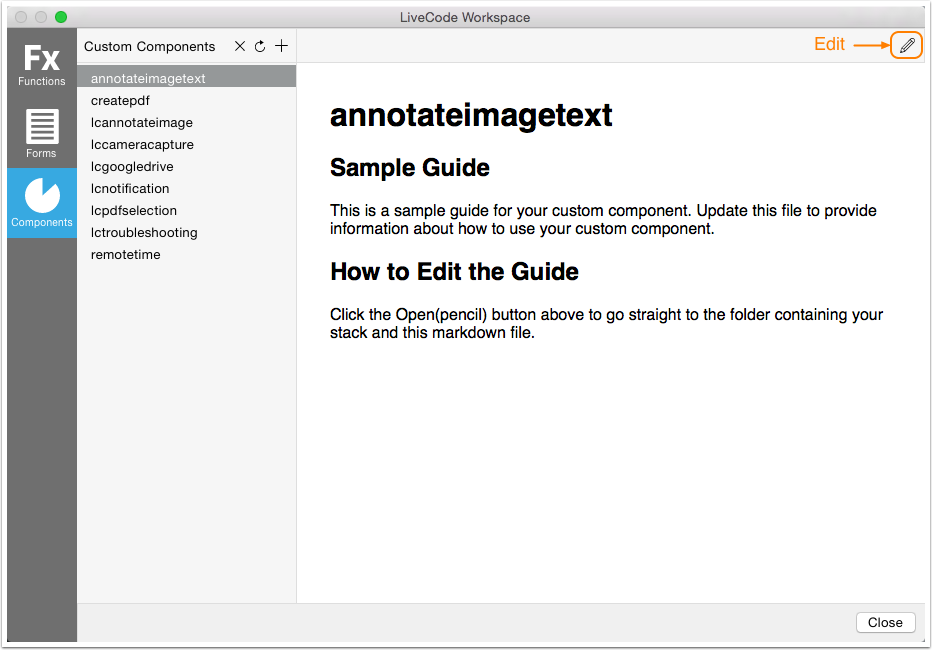 The "annotateImageText" component will appear in the list and will be automatically selected. When a new custom component is added a default guide is created for it. You can update the guide, which is written in Markdown, by clicking the edit button which opens the folder containing the custom component and editing the 'guide.md' file in the folder.

When you are done click the "Close" button to return to the solution. 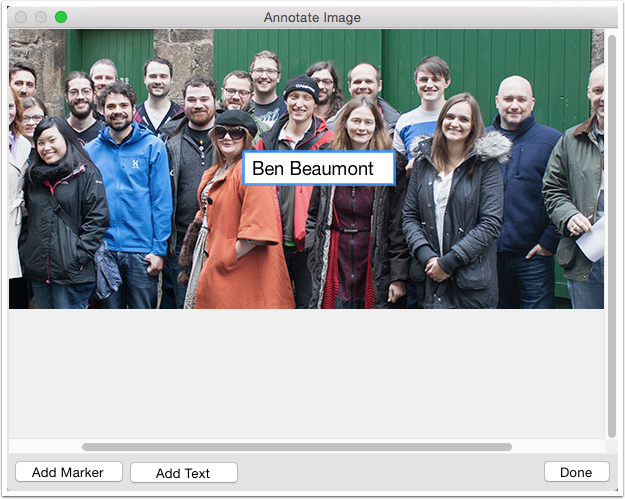 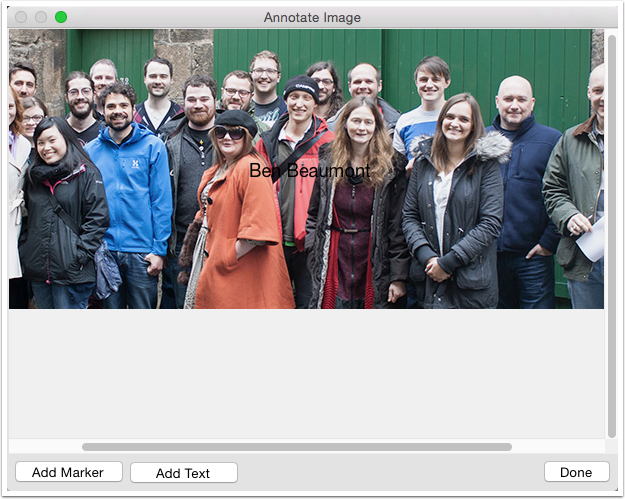 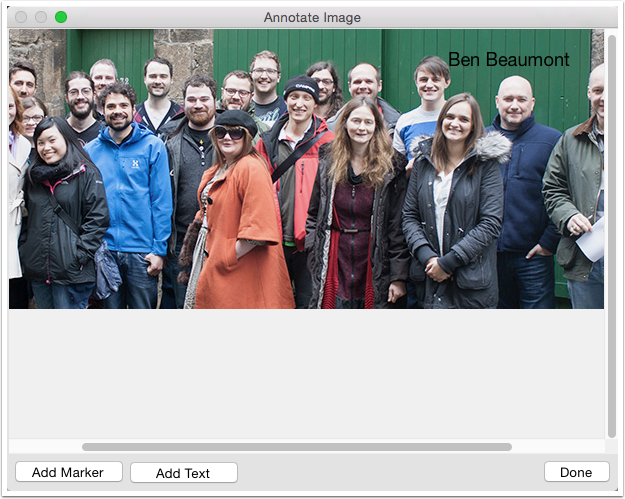 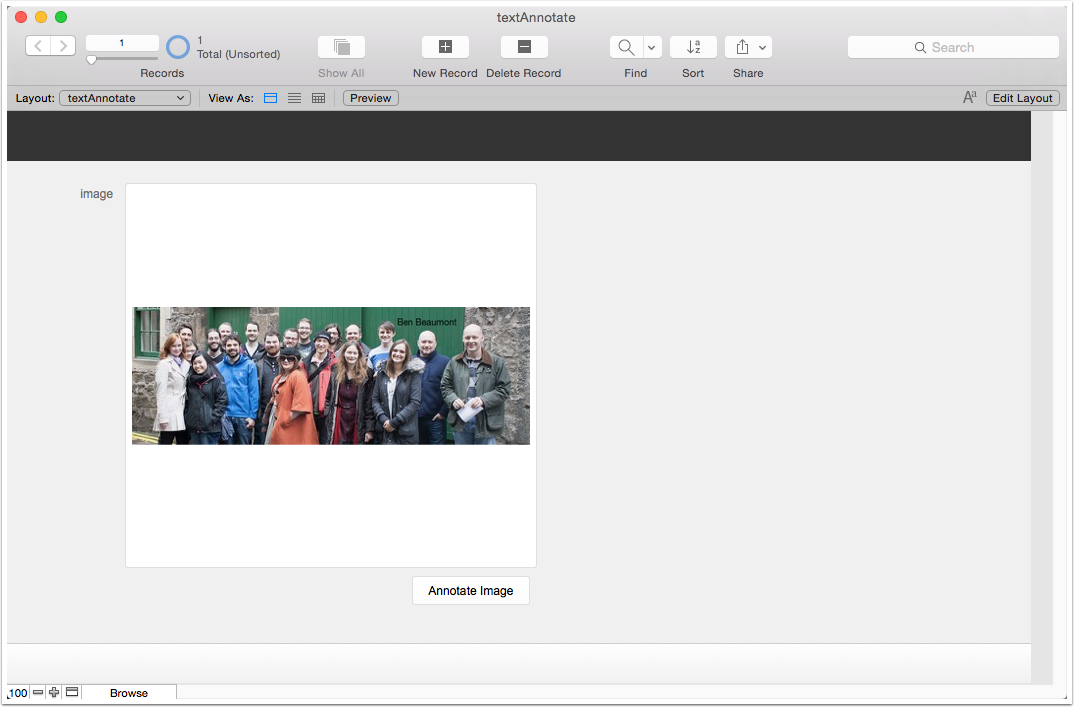 Click the "Done" button to return to the solution. The container will be updated with the annotated image.

How do I create a custom component?

How to I use the PDF Selection Dialog?

Have a look at the 'Remote Time' dialog interactive tutorial. You can find this in your LiveCode account.